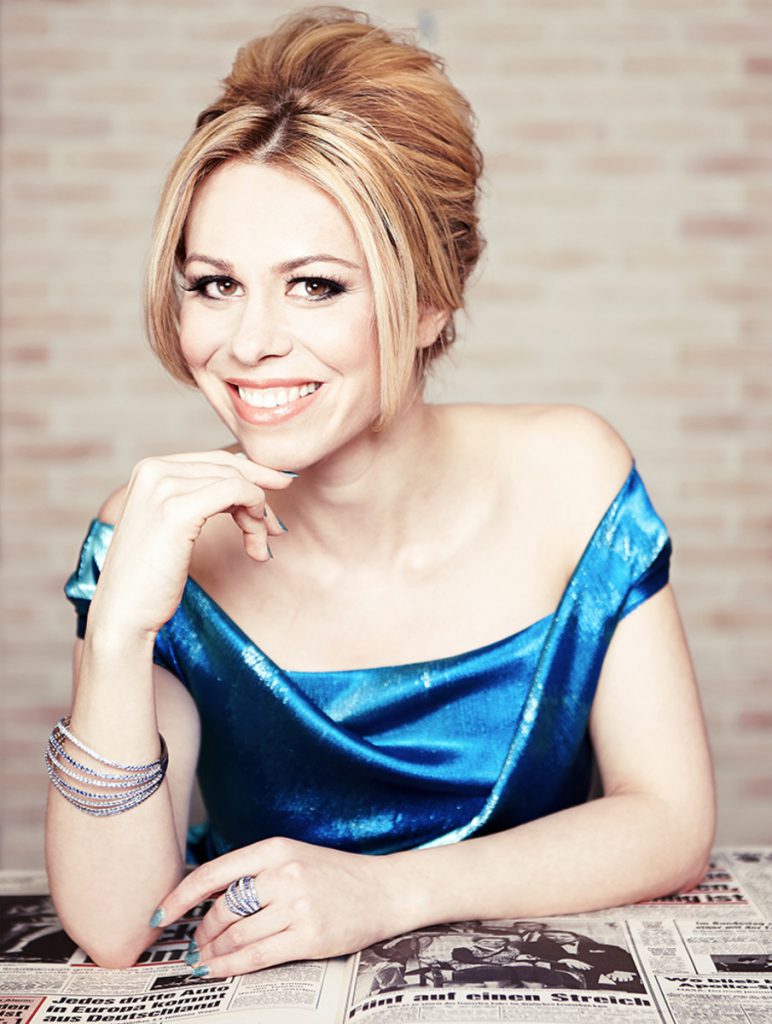 Since 23 years Daniela Fally is on stage and was able to explore different genres. First she was an actress, then a musical actress, then came the operetta and finally the opera, the concert and the Lied song. Trained by Prof Helena Lazarska (solo singing) and Prof Edith Mathis (song and oratorio) at the Vienna University of Music, she quickly established herself as one of the internationally leading coloratura sopranos.
She was an ensemble member of the Volksoper Wien for 5 years and has been part of the soloist ensemble of the Vienna State Opera for over 10 years now.
In addition, she has been able to build an international career, which she repeatedly braught her to the Scala Milan, the Lyric Opera Chicago, the Opéra Bastille Paris, the Semperoper Dresden, the Hamburg State Opera, the Bavarian State Opera Munich, to the New National Theater Tokyo, to the opera houses in Zurich, Dusseldorf, Bonn, Stuttgart, Toulon, Leipzig, Liège, Marseille, Cologne, Wiesbaden, Strasbourg, to the Salzburg and Bregenz Festival, to the Salzburg Easter Festival, the Munich Opera Festival, the International May Festival Wiesbaden, the lake festival Mörbisch and many more.
But not only the scenic works and opera are her interest. Concerts and recitals with repertoire from all eras and styles took her to the Grafenegg Festival, the Lucerne Festival, the Musikverein and the Konzerthaus Vienna, the Musikverein Graz, the Deutsche Oper Berlin, the Alte Oper Frankfurt, the Graz Stefaniensaal , the Arena Salzburg, the Grand Congress Hall Innsbruck, the Hamburger Musikhalle, the Munich Prinzregententheater, the Bonn Theater, as well as Switzerland, Japan, China and Dubai.
She worked with the following orchestras: Cleveland Orchestra, Munich Philharmonic, Munich Radio Orchestra, Vienna Philharmonic and various ensembles from their midst.
Daniela Fally has worked and works regularly with almost all famous conductors of our time such as Christian Thielemann, Franz Welser-Möst, Adam Fischer, Asher Fisch, Kirill Petrenko, Fabio Luisi, Leopold Hager, Julia Jones, Philippe Jordan, Simone Young, Ulf Schirmer, Peter Schneider, Nicolaus Harnoncourt, Kent Nagano, Bertrand de Billy, Christoph Eschenbach, Frédéric Chaslin and many more.
Numerous recordings (Cd and Dvd) prove her work.
Since September 2019 Daniela Fally teaches at Richard Wagner Konservatorium Wien and is a regular guest teacher at the opera studio of the Vienna State opera.
She is invited to numerous masterclasses in different countries.
We use cookies on our website to give you the most relevant experience by remembering your preferences and repeat visits. By clicking “Accept”, you consent to the use of ALL the cookies.
Cookie settingsACCEPT
Manage consent